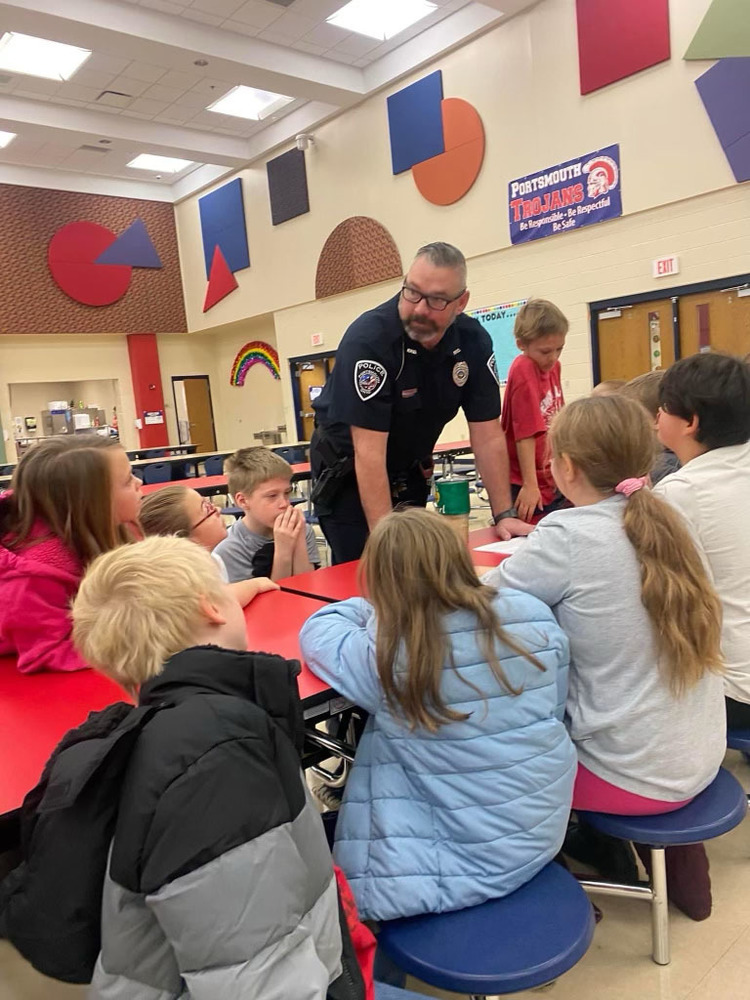 It was a holiday whodunit in the hallways of Portsmouth Elementary School this week, as third-grade students returned to class only to find the hallway “streets” of Threetown vandalized by a Christmas Scrooge.

Threetown is the name of the third-grade community at PES, where students take jobs in their Threetown community and deal with mock situations that reflect what they might encounter in the real world. Students can choose jobs at the Threetown market, newspaper, or even be elected to Threetown City Council. In this scenario, which was arranged by staff at Portsmouth Elementary, students had to discover who vandalized the Christmas decorations that line the hallways of Threetown.

“We had a mock crime scene on Monday while the students were at specials. When they came back, our hallway was vandalized with silly string, some of our Christmas decorations were torn off the walls, and our famous 8-foot tall inflatable gingerbread man was stolen from the hallway,” said Third Grade Teacher Megan Cornett.

When the students returned from specials, they immediately noticed the mock-crime scene and they were excited to get down to business capturing the humbug responsible. Students in the Threetown Safety Patrol worked alongside real Portsmouth Police Officers to investigate.

“They met during their recess time for daily briefings. They took some pictures in the hallway for the Threetown newspaper, and they were looking for any clues as to who might have done that. The next day, they watched the security camera footage in the office,” Cornett said.

After interviewing many possible suspects, there came a break in the case. The missing gingerbread man was found in the office along with a note wishing a Merry Christmas from Principal Beth Born. While being interviewed by the Saftey Patrol, Born said the gingerbread man was given to her as a gift from School Psychologist Sarah Bock.

“They brought Ms. Bock in for questioning and she admitted that she was feeling a little left out from the Christmas spirit, and that’s why she did the crime,” Cornett said. “They settled everything on Thursday, and all is good in Threetown now. Our gingerbread made it back yesterday afternoon, and there’s a new sign on him thanking students for their help in bringing him home.”

In addition to being a fun experience for students, Cornett said the exercise was also a lesson for students to learn how to be a good neighborhood watch.

For more information about Portsmouth City Schools, visit them online at www.portsmouthtrojans.net, or follow the school’s page on Facebook.